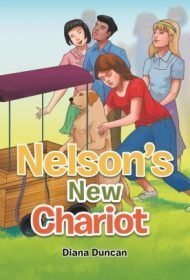 The book begins as Abbie’s father brings home a chubby puppy one day. Mum names him Nelson, and the puppy quickly becomes part of the family. But over time, he gets fat from eating too much. The vet tells the family that Nelson’s hips are weak and he needs an operation to help him walk. Unfortunately, the family budget is stretched thin.

Then Abbie and her sisters step into action, salvaging parts from an old pram to build a cart for transporting Nelson. The story ends happily, with Nelson apparently no longer needing the cart—but occasionally enjoying a ride nonetheless.

The narrative is delivered in rhyming verse that flows smoothly, and the illustrations are nicely rendered, with detailed backgrounds and, most notably, realistic depictions of Nelson.

The book’s primary weakness is a lack of clarity. Questions abound: The vet recommends an operation, but what sort of operation?  There’s mention of injections that help reduce Nelson’s pain, but since the operation never takes place, one wonders: Was the vet wrong about the operation? At one point, the mother suggests Nelson could get along with three legs: Is she suggesting amputation? And how would that help the other hip? And why doesn’t the family simply put Nelson on a diet to lessen the weight on his hips?

Meanwhile, while it admirably speaks to female empowerment, as the sisters handily solve a problem, it does so at the expense of men. Says Abbie: “Our mum says men are all just fools./ ‘Do things yourself,’ she says. Don’t ask/ cos Daddies cannot multitask.’” Such generalizations—whether about men or women—send an inappropriate message to children.

Despite the book’s flaws, Nelson is an appealing character. Young children may also enjoy learning about how the girls in his family rally to solve a difficult problem.