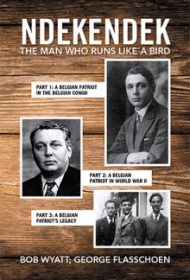 This fictionalized biography is a son’s effort to redeem a father’s legacy from what the author believes is unfair accusation and slander.

We first encounter Josse Flasschoen at the 1900 Paris exposition, where he improbably meets two people who will come to determine his fate. One is a fellow Belgian who later would cost him his reputation and, quite possibly, his life. The second is Adolf Hitler.

Following WWI, Flasschoen embarks for the Belgian Congo and discovers the inhuman conditions forced on natives by King Leopold. He marries, establishes a palm oil plantation and protects his workers against the continuing viciousness of Belgian authorities. But the Depression collapses his market and Flasschoen returns to Europe with his family and the nickname “Ndekendek” (“man who runs like a bird”) bestowed by appreciative Congolese.

The outbreak of WWII finds Flasschoen in France as an official in the Belgian Foreign Ministry and later working with the Belgian underground and British and French intelligence. He’s betrayed by the same Belgian he met in Paris in 1900 (now out to save his own skin), executed by the Nazis, and after his death, declared a traitor to his country.

The novel’s clear focus is to disprove the latter, an attempt somewhat diminished by occasional extravagant claims (such as suggesting that Hitler’s final thought before his suicide was of Flasschoen’s contempt for his artistic talents way back in Paris).  Such imaginings, along with other unlikely encounters between characters and verbal exchanges, tilt the volume from biography toward fiction, yet the stark picture it paints of a time of chaos and torment, both in Africa and later in Europe, ring true. The result is a strange hybrid, not quite living up to the demands of either genre.

While the author doesn’t definitively make his father’s case and the fact/fiction confusion can be frustrating, general readers should appreciate the portraits presented of the colonial period in Africa and the chaos of Europe’s war years.