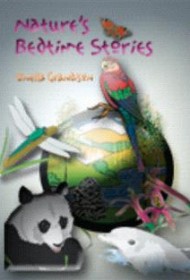 Nature’s Bedtime Stories by Onella Grandison, a native of the Caribbean, tries to capture the carefree days of the 1950’s. Using nature as her theme, she has included 22 short – some very short – stories that seem to be inspired by her happy, carefree childhood.

The stories are populated with sunshine, flowers, butterflies, birds, dogs, and other natural features. For example, “Who’s Trevor?” is about children playing outside, while unaware that an owl is observing their games until he shouts out “Who?” when a new friend joins their play. “Peppy The Brave” is an ironic tale about a puppy afraid of thunderstorms who hides under the bed. All have a certain charm but lack consistent structure.

Although the appeal of a book inspired by the natural world might initially attract parents, the slim volume’s lack of solid editing makes for a difficult sale. The stories’ points of view often change midway through the narrative, making them hard to follow. The book is also riddled with poor grammar and spelling, and it is unclear what age of child the author is targeting; children may become confused by the vocabulary, for example, which is advanced in some instances.

Visually, the book is organized with plenty of white space, but the illustrations seem randomly chosen and are simple black-and-white computer clip art. They do little to support the content of the stories.

This book would have been more successful had the author created a cohesive storyline with a progressive timeline featuring herself telling the tales to her child at bedtime or cuddle time. As presented, these pieces will be challenging for both children and their parents to follow and enjoy.