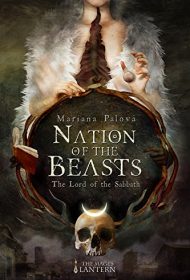 In Nation of the Beasts: The Lord of the Sabbath, Jalisco-born Mariana Palova weaves a tale full of eeriness and horror.

These elements come early in the tale of Elisse, a recent New Orleans arrival seeking to uncover unsettling mysteries surrounding his roots, even as he’s battling nightmarish visions that have long haunted his dreams. Born in Tibet and left at an Indian monastery as a child, Elisse knows little of his parents or his background. He’s come to Louisiana to seek answers, finding temporary shelter at a local Buddhist center and looking to track down any clues about his real identity.

That quest uncovers unsettling secrets about his lineage, mysteries rooted in fantastical tales of ancient magic and supernatural beings known as Shadowgazers. Even as he uncovers more about his own ancestry, Elisse finds himself pulled into plots and personages tied to the local voodoo and magic of New Orleans. In battling forces of darkness, Elisse is forced to come to terms with his own dark familial secrets and past.

Palova’s narrative is precise and probing, a quality that shines through in M. L. Anderson’s translation of the original text. In painting a picture of New Orleans’ mystic and magical traditions, Palova writes with an eye for detail that is immediately arresting and affecting, especially when it comes to the descriptions of nightmarish monsters and grisly murders.

Unfortunately, Palova’s sudden shifts between perspectives and narratives can sometimes confuse the track of the story. In shifting between Elisse’s first-person account and the omniscient, third-person perspective of some of the book’s creepiest villains, the story can feel scattered and confused. Thankfully, as the author delves deeper into the story and the characters become more distinct, the narrative becomes more streamlined and the impact more effective.

For horror, thriller and fantasy fans willing to give the author a bit of time to get rolling, Paloava’s tale is a haunting foray into the unknown.