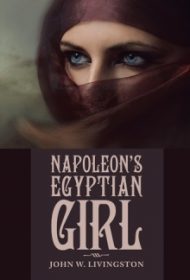 In Napoleon’s Egyptian Girl, John W. Livingston weaves an extraordinary tale set in the period after 1798, when Napoleon’s army entered Egypt as another in a long procession of occupiers.

As the novel begins, the Egyptians are astonished to see the pale-faced Frenchmen in tight-fitting uniforms marching down the streets and are horrified at Napoleon’s vision of equal rights for all, including women.

The story is narrated by Zaki ibn abu Khalil al-Bakri, who tells of his strong-willed younger sister Zaynab’s fascination with all-things French and of his father, a respected and deeply religious shaykh, who hopes to curry favor with Napoleon by offering Napoleon his daughter in marriage. Instead of agreeing to this, Napoleon invites Zaynab to study at an institute he has established for learning French language, philosophy and science. She quickly embraces French language and customs, alarming her father, who retreats to his prayer room seeking solace in the Quran.

As Zaynab studies, she falls in love with a young French officer. Meanwhile, the country gradually calms and accepts French order — until British Lord Nelson defeats the French, and Napoleon flees back to France under cover of darkness, his absence precipitating riots that have tragic consequences for Zaynab. Distraught that Napoleon hadn’t married Zaynab and by Zaynab’s actions, the shahykh feels betrayed by the French, his family and Allah, becoming a classical tragic figure. Meanwhile, Zaynab, who only wanted personal freedom, pays the greatest price of all.

In Livingston’s hands, this story springs vividly to life. It’s filled with the sights and sounds of Egyptian life, so real that readers will feel they are there. Fully dimensional characters brim with their own hopes and dreams and ably convey the routines and beliefs of their individual cultures. As readers are drawn into the compelling plot, the novel offers an utterly immersive experience.

By story’s end, readers will feel grief-stricken and stirred as this vibrant tale reveals the high price of war and misplaced ambition.