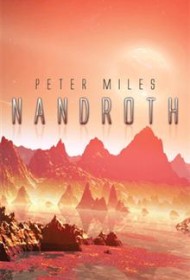 When Axel, an unlucky-in-love computer scientist, inadvertently transports his mind across the galaxy, he awakens on the planet Nandroth, coaxed back to consciousness by a gorgeous alien. Her name is Derayna, and she is betrothed to the very man whose body Axel now occupies. If that weren’t enough, they’re already in danger, threatened by the Mekkans, a race of robotic organisms bent on interplanetary domination. And surviving that encounter may just be the least of Axel’s worries: He still must persuade Derayna of his true identity, earn her trust, and ultimately embark on a mission to rid Nandroth (and, by extension, Earth) of the Mekkan threat.

Adventure and romance permeate Nandroth, and the author wastes no time igniting the action. It makes for some exciting reading, but character development is a frequent casualty; Axel develops nicely from lowly computer nerd to a latter-day Flash Gordon, but Derayna is restricted to an object of desire and is never really given room to grow. Similarly, Axel’s acclimation to this brave new world and Derayna’s adjustment to the stranger in her lover’s body both seem a bit hasty.

These flaws need not be fatal, however. Nandroth evokes nostalgia: the sense that you’re reading a vintage science fiction pulp. It offers an adolescent appeal (except that explicit sex renders it inappropriate for young readers). The story would benefit from more nuanced characters with more credible motivations, but readers looking for something in the vein of Edgar Rice Burroughs’s classic Basroom novels or perhaps a less brutal variation on John Norman’s Gor series, just may find that this tides them over.