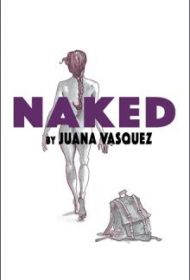 In Juana Vasquez’s first-person novella, a woman attempts to face her fears through a mystical odyssey, while moving towards a discovery of faith, courage, and freedom, in pursuit of personal growth.

Gigi is a young woman at a crossroads. Stifled by her circumstances and surroundings and feeling lost and fearful, she recognizes a need to move forward. Thus, she grabs a small backpack and fills it with minimal essentials. The tightly held pack quickly proves a metaphor for the concerns that cause Gigi’s stagnation. Work, social life, people, and places—all are obstacles contributing to her fear of change and lack of freedom.

Gigi is intent on reaching Callicoon, a small town in upstate New York that she recalls as a magical place. But her trek soon becomes an emotionally charged down-the-rabbit-hole journey as she encounters myriad individuals and situations that force her to confront her fears, from a man in tattered attire who holds a dead ostrich and warns Gigi that ” … every day in life is a test” to a group of colorful and disturbing vendors whose ever-changing emotional states cause her to fight for survival.

Gigi’s inner thoughts dominate the story. Although they speak to her inability to progress in life, they bog down the narrative and become repetitive. Additionally, Gigi’s arrival at “The Churchill,” the vendor’s row, results in a chapter comprising half the book. Here, the odd circuitous acceptance and rejection she experiences from the locals plays out too long. In contrast, her enlightening realization about acceptance seems too sudden. Ultimately Gigi asks more questions than the story answers, such as: “Has God vanished?” and “Could it be that I am on trial for my Faith? ”

Vasquez’s interests in human behavior, religion and metaphysics have clearly influenced her writing. While the searching premise of Naked could interest readers at a crossroads in life, others may find the endless ponderings and surreal journey too abstract to satisfy.