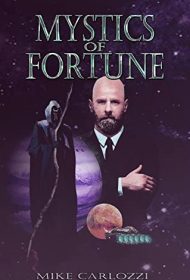 A prologue sets the stage: Asteroids that hit Earth in 2029 transmitted a deadly virus to people; survivors gained extra powers and became mystics. Following a war, mystics were exiled to the newly discovered planet of Ojult. The Earth and its planetary settlements are now controlled by the evil Reeves Corporation.

Ojult is something of a penal colony, divided into opposing groups, including mystics; mafia-esque mercenaries linked to the Reeves Corporation; and those just trying to survive in this harsh environment.,

Jayden Vaut enters this mix in 2389, sent to Ojult because his late parents had too much debt. The novel traces the lives of Jayden, who eventually becomes a mystic’s slave assassin and then independent gunslinger; Elasus Reeves, the malevolent head of the Reeves empire whose daughter flees to Ojult after he kills her fiancé; Syrus, the harsh mystic ruler of one of the groups, and Markus, the kind, wise, unofficial mayor of a tiny Ojult town.

While this is a science fiction novel, the evocative Ojult setting—barren, harsh, with an every-man-for-himself atmosphere—seems out of a Western novel: “Thoba slaves regularly cleaned the mundane hall, but today, beads of blood soiled the concrete floor… pooling at the feet of a callous-looking bearded man. The man, a gunfighter, wore a wide-brimmed black hat, faded dark overcoat, burly dark pants, hand-crafted boots, and a broken-in revolver resting inside a thigh holster…”

While much of the novel is told through the main characters’ eyes, several chapters are related from other characters’ viewpoints. In less able hands, this could be confusing, but Carlozzi expertly weaves this gritty tale of good and evil. Despite the novel’s length, readers will remain engaged throughout.

The epilogue, told by the evil Elasus, hints at a sequel. Meanwhile, fans of sweeping space odysseys and Westerns will enjoy the wild yet skillfully plotted Mystics of Fortune.