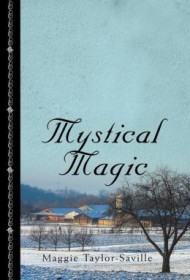 The bond between young girls and horses may seem a cliché, but it does, in fact, exist. And as suggested in the title of Maggie Taylor-Saville’s new novella, to outsiders the passion borders on the mystical and magical.

In Mystical Magic, Taylor-Saville explores one girl’s journey from adolescence to womanhood with her love of horses as the backdrop. The story centers on Katie Richards, a shy 17-year-old living near Victoria, Australia, and the choices she makes in her life. Katie volunteers at a ranch to be closer to the feisty horse that only she is able to ride and also works for a local veterinarian who encourages her to follow her dream and become a large animal vet. Complicating matters is a handsome young man who appears on the scene, one she at first hates but strangely finds herself attracted to.

The story has the makings of a fine tale, but falls short as billed. The storyline dutifully follows Katie as she matures into a young woman but the novella’s writing style and character development are overly simplistic. Although the crossroads that many young women face are all here – love vs. career, breaking away from parents and so on – the tidy resolutions feel shallow.

Mystical Magic could be so much more with some added depth. After the opening few chapters, it feels as if the horses are only props. While that could work to illustrate how, as Katie grows older, her love for a man replaces her love for her horse, that doesn’t seem to be what the author intends. There is a passing reference to how Katie’s mother felt the same love for horses and a concluding scene that hints at the next generation of horse lover, but the bond and complicated emotions between girl and horse need deeper exploration in order to live up to the title and more fully engage an audience.