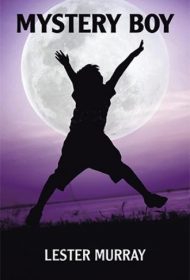 Lester Murray’s Mystery Boy begins with an intriguing scene: A police officer finishing his rounds discovers a naked young boy shivering under a heap of old newspapers in an empty house.

The boy, about 11 or 12 years old, can’t speak. He’s brought to a foster mom, who calls him Mikey. He’s then taken in by Sam and Dottie, who he calls Mom and Dad. Mikey, who has obviously been traumatized, somehow communes with his foster parents’ computers and re-learns how to speak.

He quickly develops a precocious vocabulary, and once at school, does amazing things; for instance, in art class, he draws what’s deemed a college-level design. He also becomes the star player on the school’s football team. With the help of his father’s “portable computer,” he’s even able to heal himself of injuries during football games.

This causes the military to investigate Mikey, and the rest of the novel explores how Mikey positively affects his community while trying to stay under the radar of military officials, who believe he’s an alien.

Although it offers an intriguing premise, the novel—a mere 141 pages—is rather thin. It could use more specific description in important passages and less detail elsewhere. For example, the author describes a meal from entree to dessert but never fully explains how Mikey communes with the computers to re-learn his vocabulary or heal his broken ankle.

Perhaps most disconcerting are the many changing viewpoints with scant transitions. The story is initially told by the police officer who discovers the boy, then shifts to the first foster mother, then the second foster parents, then Mikey, and so on. It’s often unclear who is narrating, causing frustration for readers.

The story requires an editor to make the transitions between narrators smoother and guide the author on where the story could be expanded. As is, its brevity and the problems of narration make it seem like a first draft, rather than finished product.