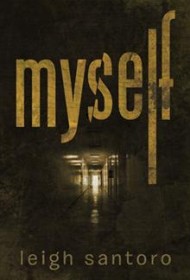 Myself is the story of psychiatrist Teddy Thyme and his involvement leading up to and including the trial of Raine Justice Liverboardman, an over-the-top crazy accused of a crime.

The story opens in what seems to be the not-too-distant future, with the beginning of Liverboardman’s trial. (The exact nature of the crime isn’t revealed until the novel’s second half.)  We then flash back to Thyme, involved in the case apparently just by asking, as he tries to understand his patient by interviewing others in the Liverboardman clan, all long-institutionalized, insane and featuring the same grotesque teeth. (These characters make the Jukes look like the Brady Bunch.) Trying to understand the family tests even Thyme’s superlative skills.

The psychiatrist-demented prisoner framework has been used often in crime fiction, and, sadly, certainly better than in Myself. The story suffers from slow plot development and an improbable twist late in the story. The author also has a habit of telling instead of showing: It’s one thing to be told that Thyme is smart and Liverboardman is crazy, but it’s far more satisfying to see these characteristics demonstrated and let readers draw their own opinions.

Additionally, author Leigh Santoro has a tendency to overwrite sentences using multiple adjectives when one would do and employing a vocabulary that must have worn out more than one thesaurus.  (“ ‘So now you know.  Well done, Doc.  I didn’t think you’d effectuate the conundrum.  Yet another reason I abnegate from gambling,’ Raine admitted with abdication.”  Or, “ ‘Raine, you are also an illogical, deficient, inarticulate, supercilious, preposterous freak of nature.’ ”)

Finally, devotees of courtroom drama will be disappointed with the author’s command of trial procedure. For example, it’s not a conflict of interest to be represented by a relative, and a witness cannot declare a mistrial.

In sum, better editing and a strong revision are required to make this story appealing to a reading audience.