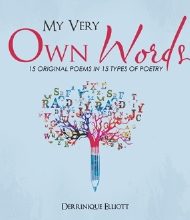 When she was 16, Derrinique Elliott wrote a series of 15 poems to fulfill the requirements of a high school project. Her teacher challenged her to publish her work, and five years later, Elliott produced My Very Own Words.

As the book’s subtitle suggests, each poem illustrates a type of poetry and includes various literary and lyric elements. With a clear, gently paced style, Elliott delivers examples of verse from epic to haiku. Interspersed in the lines, the reader can find such writing conventions as consonance and assonance, synecdoche and simile.

Elliott’s poems encompass a wide range of interests. She explores the power of words and the nature of sound. She writes an ode to the piano and a limerick about a boar. She touches on love gained, love lost and times gone by.

Although these poems were written as examples, few seem forced and many show a spark that augurs well for Elliott’s development as a writer. The line “Black buttons dared never shine so bright” from “To My Piano” demonstrates a deft use of assonance and consonance. “The Tiny Boar” has the limerick rhythm down pat, and her line “The click of the door handle that draws her attention” in “I Am …” invites the reader into a marvelous tension between the onomatopoetic sound and the perceiver of the sound.

Much of Elliott’s language, however, is too abstract to convey the precise images required by poetry.  Lines such as “Her eyes were cold/Her hair was long” and “Green is a sign of life” have little impact and may disengage the reader. Others, such as “How he saved me from the whips/ And chains that imprisoned me,” utilize tired imagery and lack justifying exposition.

As it stands, Elliott’s book could serve as an exemplar for poetic forms, but it would be much better if she tightened her imagery and found the perfect words for every line.