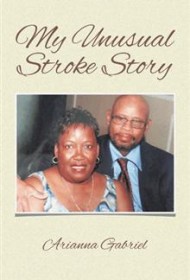 In this slim memoir, New Yorker Arianna Gabriel recounts details of her “unusual” stroke” and gradual recovery while offering encouragement to others with similar problems.

A vigorous, middle-aged woman with a good job, Gabriel’s life changed radically the day before her birthday, when she was feeling proud of her accomplishments, especially a recent notable weight loss. Her symptoms were atypical and escalated slowly, offering no inkling that a life-threatening event was imminent. Later, her family doctor would say, “You were not a candidate for a stroke. All your numbers were good.” Because her stroke was asymptomatic, some misjudgments were made, but once the situation stabilized, Gabriel received excellent treatment and, in general, offers praise to her caregivers.

In plain language and some humor, Gabriel depicts the frustrations of long hospital stays, misdiagnoses, and myriad other challenges that arise in the medical environment. She praises her husband, who stalwartly assisted her. And though she is not a churchgoer, she believes in God; prayer played an important role in her recuperation.

Gabriel speculates that a traditional Jamaican remedy, whole nutmeg, may also have helped. She forced herself to swim, do “childish” writing exercises, and even “talk to” her inert hand, ordering it to move. Small but vital strategies, plus an indomitable will, helped Gabriel progress from total immobility to the active life she now enjoys. Throughout her account, she encourages other stroke sufferers: “always stay positive,” “don’t shut yourself away,” “join a support group.”

My Unusual Stroke Story is competently written, though without the flair, detail and narrative arc that would engage general readers. Given its short length and personal nature, it seems intended mostly for family and friends. However, it could also be well received by a target readership of people recovering from stroke or similar trauma and needing encouragement.