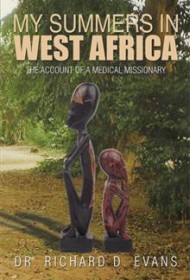 A general surgeon from Florida shares his experiences and insights while working as a medical missionary in West Africa in this highly detailed and illuminating book, written to inform and inspire others with the desire to embark on a similar journey.

The information is based on journal entries the author kept during his three, one-month trips from 1995 to 1997 to assist as a volunteer at a 110-bed hospital in Nigeria. His travels opened his eyes to the area’s deplorably unsanitary conditions and its challenging poverty, starvation, high mortality rate and rampant and dastardly infectious diseases (including AIDS, TB, polio and many exotic tropical maladies), which too often prove “swift, efficient, and merciless”: For children hoping to reach adulthood, it’s “a journey with many speed bumps.”

Richard D. Evans’ surgical days were extra long and made more difficult due to the lack of important life-saving medicines and surgical supplies, such as Demerol and Foley catheters. Much of what he did have, he brought in himself after convincing U.S. doctors and hospitals to donate. The most common surgeries he performed involved thyroid issues and hysterectomies.

The author not only highlights specifics from his cases, but offers engrossing historical detail on diseases, including tuberculosis and malaria. Throughout, he punctuates the text with fascinating conversations with the friendly and resilient local residents, and also details one disturbing, harshly administered public punishment, where a man who committed a misdeed was ringed with car tires (known as an African necklace) and set on fire.

Despite the book’s length, My Summers in West Africa is not a dry thesis but a living, breathing, vividly written guidebook into the heart of the African continent. It succeeds in its ambitious aim to provide a clear-eyed view of what to expect should one choose such an important expedition.