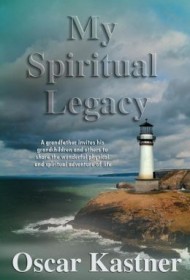 There is so much lost history in the lives of family members, lives we’ve often never fully known despite the memories of others or snapshots in a photo album. In My Spiritual Legacy, author Oscar Kastner presents a series of short vignettes as a gift to his grandchildren about his love of science, his search for God and a deeper understanding of Christianity, and his journey to find his purpose.

This collection of thoughts and ideas, spanning from 2003 to 2014, is presented as an intellectual keepsake, an opportunity for his family to participate in “the adventure of life” that is found in everyday existence.

Kastner’s idea for this journal grew out of not knowing his own grandparents. “I would like to have been able to talk with them,” he writes, “and have them tell me what the world was like during their lifetimes.” Hence, My Spiritual Legacy is a work for posterity, an exercise that offers simple insights on such topics as the miracle of colors, the inspiration of music and the complexity of DNA, to name just a few.

One of the most poignant entries concerns one of his sons being diagnosed with schizophrenia. This event led him to new ways of offering compassion to those with mental illness. Kastner also reflects on the many books that have influenced his life, from the Bible to works by scientist Richard Feynman. Ultimately, the underlying message is simple: Inspiration can be found in all things.

My Spiritual Legacy is a deeply personal book. With its entries ending with the date they were written and the author’s simple language and consistent use of phrases such as, “I think,” or “I believe,” it often reads like a found diary. But while its intended audience may have been Kastner’s inner circle, the book’s subject matter could also appeal to pastors and ministers looking for examples of how we can find the sacred in the day-to-day.