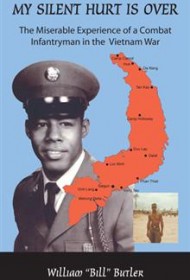 We often think of war in terms of winners and losers, or the number of casualties incurred by one side. War’s darkest legacy may be that of the survivors who must live with what they’ve seen and done. In My Silent Hurt Is Over, William Butler looks back at his “miserable experience” in the Vietnam War.

Butler grew up near Houston, Texas, in a close-knit family. When his parents divorced, he began working to support the household while planning to go to college. Instead, he received a draft notice and his life was forever changed. Army service as a combat infantryman in Vietnam was violent and terrifying, and the nightmares he lived through followed Butler for years after coming home.

While his story is gripping in the way that all war stories are by their very nature, the writing suffers from disorganization and lack of clarity. Butler refers to his “earlier writing” frequently, but it’s unclear whether this book is a sequel or intended to stand alone (the author often alludes to events from his previous books without telling the full tale for new readers). Spelling and punctuation are inconsistent, and words not commonly used, such as “precautious,” further muddle things.

Despite a rambling approach to the material, Butler writes movingly about attending a parade for veterans of the first Gulf War and the healing effect the acceptance of the crowd had on him. Some of his early observations are powerful as well: “Getting used to people getting injured and killed seemed almost inhuman. I guess that is partially what a soldier becomes after so many fire fights.”

My Silent Hurt Is Over may confuse readers not yet familiar with Butler’s story, but it’s a testament to the emotional damage caused by war, and to his persistent work to overcome it.

Note: Photos and newspaper clippings are reproduced here, and the last several pages reprint lyrics from hymns popular at the author’s church.