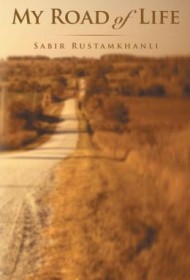 Azerbaijan sits at the crossroads between Eastern Europe and Asia. It is bounded on one side by the Caspian Sea and, with near neighbors Georgia and Armenia, surrounded by giants such as Russia, Iran and Turkey. Smaller than Maine, it is virtually impossible to pinpoint on a map. For what most of us know about this country, it might as well be on the moon.

However, its geographical position has lent Azerbaijan historical, political, economic and cultural significance for thousands of years, a legacy that fires the imagination and pen of writer Sabir Rustamkhanli. “This book is my love letter!” remarks Rustamkhanli, one of the country’s contemporary writers and an influential, ultra-patriotic figure.

In this book, the author takes readers on a geographical and philosophical tour of Azerbaijan, his mind dancing across the centuries as he reminisces about the people, their cultures, customs and conflicts. He also points to mistakes he sees in the historical record, turning fiercely revisionist about the past conduct of Russia and Iran.

Unfortunately, Rustamkhanli’s writing is extremely difficult to follow. Words explode haphazardly across these pages in a narrative populated by obscure places and hundreds of equally opaque characters dating back thousands of years. Metaphors, literary allusions and historical references bog down the prose. (“In the VII century BC there was a state of the Saks and Scythians in the northern Azerbaijan. Another name of this state is Ishguz. There are scholars who read it as Ichoguz, in this way they relate it to the tribes of Oghuz and Guz…”)

The rambling storyline becomes even more impenetrable due to numerous spelling and grammar mistakes by the author or his translators.

Although Rustamkhanli wrote originally for a domestic audience, this English edition would have benefitted from the inclusion of some significant background explanations. Readers willing to tackle this challenging book ideally need some prior knowledge of Azerbaijan, or a connection with that region, to make the effort worthwhile.