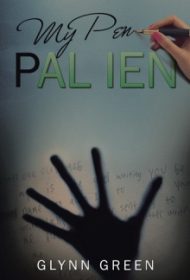 Glynn Green’s ambitious debut novel is a near-future science fiction narrative structured in large part in epistolary form, with pen pal letters exchanged between a young girl and an alien covertly living on Earth amongst humankind.

The girl, a fifth-grader named Dyrain, begins receiving strange letters from a boy who calls himself Ien Green. After a tumultuous start, they cultivate a friendship. As the years pass, Ien confesses to Dyrain that not only is he an alien, but that countless aliens live among the populace secretly orchestrating human lives like characters in a drama. Much of humankind is being manipulated by these aliens, who are “documenting”  individuals’ lives for some mysterious purpose. Complicating—and convoluting—matters is an inadequately explained plot thread dealing with a villain who wants to somehow destroy the human race.

While the premise of this novel certainly isn’t new (Peter S. Beagle’s 2010 short story “Kaskia,” which chronicles a man’s correspondence with a beautiful alien through a strange computer, recently explored similar ground), Green’s take—particularly including some of the actual letters—is innovative and interesting. There is much to like here:  the visionary glimpse into humankind’s near future, the cast of quirky and unconventional characters, the fluid writing style, and the Rudy Ruckerian lingo (an “eqi,” for example, is a foldable laptop that can fit into a person’s pocket).

But the fatal flaw is the lack of a satisfying conclusion. The narrative seems to be leading up to some kind of climax (the alien races cohabitating, the villain being defeated, or, at the very least, an existential revelation of some kind), but readers are left with an ending with no thematic power or narrative resolution.

In the end, My Pen Pal Ien’s intriguing premise and innovative structure is laid low by a conclusion that doesn’t deliver.