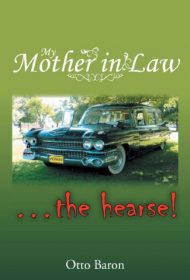 Our limited knowledge of the afterlife makes it ripe for speculations ranging from the serious to the downright ridiculous. In My Mother in Law…the Hearse!, author Otto Baron has raunchy fun in the style of Christopher Moore with a deceased villain so driven on revenge she…well, you can probably guess from the title.

When Clarice Pillsbury passes on, her daughter and granddaughter are understandably bereft. But son-in-law Sam is struggling to suppress his glee. Clarice made no secret of her hatred for Sam while she was alive, and when he was pressured into making a deathbed visit to say goodbye, she had tried to choke him to death. Unsatisfied in hell despite a promising flirtation with the Prince of Darkness, Clarice finagles a trip back to the surface in the form of a hearse bent on finishing Sam off. He tries to keep one step ahead of her, but those vintage cars can move awfully fast!

There’s much to enjoy in this story. Clarice is a Cruella de Ville figure, comical and scary at the same time, while Sam is smart enough to know he’s in an impossible bind, running from a threat nobody else can believe is real. There are plenty of quick jokes and asides that keep things moving at a fast pace. However, several misspelled or misused words detract from the experience as do punctuation and other grammatical mistakes. Also, at 75 pages, readers will long for more story and character development.

Fans of Moore or Carl Hiaasen will click nicely with the over-the-top plot and eccentric characters that make up My Mother in Law…the Hearse! Careful editing and building on the story’s strengths would further increase this slim book’s appeal.