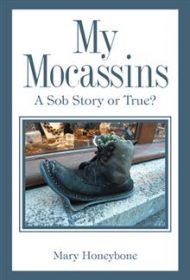 In My Mocassins, Mary Honeybone presents the story of Libby, a woman who grew up under the strict control of her fundamentalist father, David. Libby’s life is one of poverty, fear, confusion, guilt and, ultimately, escape to a better existence.

While the story seems to be fiction (the protagonist’s name is different than the author’s, for example), it could also be autobiographical.  “Could this be a true story or a story which is written to pull sympathy from the reader? Does it exaggerate the truth, or is it all true to fact?” the author asks on the back cover.

The story is set mostly in rural Scotland beginning in the 1960s. David and Yvonne Hayter had six children before their marriage dissolved. Libby and her siblings were shuttled between parents who relocated so frequently that she attended ten schools by the time she was seven. One constant was the domineering presence of her father, whose strict religious beliefs kept his four daughters from school and relegated them to the role of servants – to God and to him. Libby struggled with that life for more than 20 years.

While promising, the narrative has some bothersome gaps. Honeybone writes about the family’s nomadic journeys, but isn’t specific as to the cities or villages they fled to, or oftentimes why; she mentions important events out of the blue, such as her driving to Scotland to get married, without any previous mention of this suitor (or ever mentioning her husband’s name).  Instead of fleshing things out, the author spends much of her time going over familiar territory: Libby’s feelings of confusion, her questioning of the Bible, her relationship with her father, the depression that seems to envelop her. (It’s also unfortunate that “Mocassins” is misspelled in the title.)

Overall, this is a confusing read, due to the vagueness of its genre and the issues mentioned above. Revision is required before this book can reach an appreciative audience.