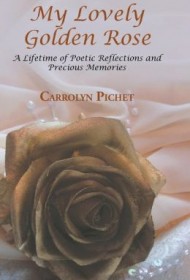 Carrolyn Pichet has had a rich career that includes a master’s degree in Spanish language and literature, teaching in France, and working for the Congressional Banking Committee, Interpol, and the FBI, from which she retired in 2009. But you’d never know it from her book My Lovely Golden Rose, which is humbly focused on personal issues of friendship, love, and marriage.

Pichet’s book, which is cleanly formatted and well designed, is divided into sections such as “Family,” “Renewing Spirits, Restoring Souls,” “Belief in God,” and “Love and Romance.” She is a graceful writer who uses color in many of her metaphors, as in the poem “To Gloria with Love,” which explores the idea that natural beauty helps her feel connected to her departed sister: “Lush green carpet on the forest floor, / A purple-blue ceiling in a storm, / Red velvet drapes of roses grown, / The golden chandelier lighting each morn.” Pichet also pays attention to sound here: the use of alliteration, assonance, and slant rhyme pays off in a unified, musical stanza.

Several of her poems focus on family relationships, and Pichet’s narrator often has a loving, encouraging tone but doesn’t shy away from the realities of her family members’ lives. While the collection’s most religious poems are written with the same sense of generosity and care, they are less engaging because they are less specific.

Perhaps the most successful poem in the book is unfortunately not by Pichet but one of several guest poets who are included. “BONES” by Melanie Henderson, is wonderfully sonic with its monosyllabic Anglo-Saxon words and surprising perspective and juxtapositions.

Despite its many positive attributes, much of Pichet’s imagery is conventional, sometimes moving into nature-writing clichés (“crystal waterfalls” “sparkling pearl dewdrops”).

Overall, this book may be especially appealing to those who enjoy reflecting on raising their family, are interested in positive poetry from an African American writer, or are seeking laudatory poetry about God.