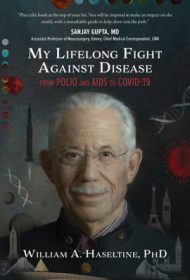 With the COVID-19 pandemic on readers’ minds, a successful biomedical scientist, biopharmaceutical entrepreneur and philanthropist delivers a timely account of how one individual can impact global health, especially related to viruses.

As someone who has worked at the forefront of global medical advances, including efforts that helped lead to combatting the AIDS/HIV pandemic, Dr. William Haseltine describes how his biomedical research led to a role as an advisor to scientists, companies, government and media worldwide. Later moving from the lab to a more expansive focus on public healthcare policy, he helped interpret data, drug/vaccine development and more. Along the way, he created more than a dozen bioscience companies and established foundations to promote global health initiatives.

Well written in a warm, conversational tone, Haseltine also shares his family’s accomplishments, as well as his mother’s struggles with bipolar disorder and his father’s likely Asperger’s Syndrome. In a lighter vein, he includes anecdotes of himself as a budding scientist with explosive home science results.

The basis of his lifelong desire to improve public health, he writes, was his early travels in a Europe barely over WWII’s horrors plus trips through Asia and Africa. Choosing to study molecular biology at Berkeley (where he became an antiwar activist, particularly against Agent Orange) and later Harvard, he lauds the educators and scientists who were his early mentors in the team-oriented research that led to scientific breakthroughs as well as political and academic challenges.

Accounts of his research are interspersed with lively anecdotes. For example, Haseltine recalls returning from a trip to Africa on an AIDS initiative with Dr. Anthony Fauci, the directors of the National Institutes of Health and the National Cancer Institute, the Secretary of HHS, the president of WHO and others when the small plane’s pilot indicated the flaps wouldn’t release for landing. The author recollects: “This has the makings of a calamity. Virtually the entire health leadership of the world is on this flight.” Fortunately, a grinding sound filled the cabin and the flaps descended.

Readers will find this dramatic, self-reflective autobiography an entertaining and enlightening antidote to today’s healthcare news. And in keeping with Haseltine’s selfless spirit, proceeds from book will be donated to his nonprofit think tank ACCESS Health International.