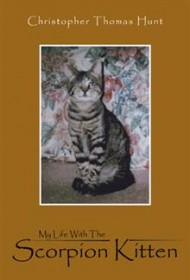 Anyone who has loved and lost a pet knows that the bonds we form with animals run deep. Author Christopher Thomas Hunt recounts the story of five years he spent with a special cat named Mathias in My Life With The Scorpion Kitten, a sad but sweet story.

Named for a character in the movie The Scorpion King, Mathias was born infected with feline leukemia. He lost one eye, giving him the appearance of a permanent wink, and went blind in the other. Despite a sizable menagerie and involvement with 4-H livestock, Hunt took a shine to Mathias, watching as the cat learned to find his way by touch and smell and adapted as the family moved from one house to another.

When he’s writing about Mathias, Hunt’s love comes through and the story moves quickly. However, too much of the book is taken up with day-to-day details of his life that read like a “to-do” list from a Day Planner, and those sections drag.

In addition, readers may come to question Hunt’s actions. Hunt and his wife keep a number of cats at three separate houses, some indoor, some outdoor, some “fixed” and others reproducing. They both work and sometimes seem too distracted to provide the care so many animals need. Several cats have to be taken to the vet and put down in the course of the book. Hunt fights with his mother over a mule he had boarded at her house; when two years go by and he still hasn’t moved the animal to his own property or taken it out to ride, she sells it and he’s infuriated, but seems blind to his own neglect.

These flaws seriously hamper the appeal of the book, though Scorpion manages to charm when the focus is on Mathias. The cat was a trouper for the duration of his life, and it’s clear from this tribute that he was loved dearly by his owner.