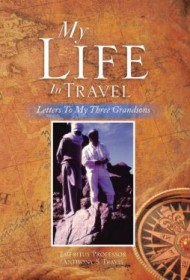 As author Anthony S. Travis tells us in his dedication — and through his title — My Life In Travel: Letters To My Three Grandsons was written with a specific audience in mind. The spark for the book, Travis notes, was his 80th birthday celebration in 2012. At the suggestion of friends, he decided to expand his remarks from the weekend-long event into a book.

Travis has indeed led an interesting life. An urban planner and consultant for more than half a century, he lived and worked in Wales, New Zealand, England, Scotland, the U.S., Europe and Africa, dozens of countries in all. Along the way, he has had a first-hand view of history, from the hardships of WWII to the birth of Israel. He recounts such events, though not in scholarly depth.

Much of the book also details family history, information that may prove boring for general readers. If your grandfather detailed the lives of distant relatives – the personality of a great-uncle’s second wife, for example – you’d pay attention. But such stories from a stranger carry little import.

Another problem is the author’s writing style. He sprinkles dashes, commas and exclamation points around so frequently that sentences become choppy and difficult to follow. An example: “The family – by stages, moved to New Zealand, (!!) It was there – in New Zealand, that all of the Travis family, Grandpa – with three of his four sons, were to settle down …”

In the end, though, we should remember the purpose of this book: “For long I have made up stories or fairy tales for my three grandsons, whose ages now range from 8 to 17,” Travis writes. “This… is a set of true stories, which I hope will interest, inform, and encourage them in the lives which face them, in this increasingly confusing, crowded, and rather troubled world.”

By that standard, he has given the young men a valuable gift.