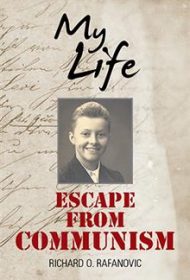 Richard Rafanovic’s memoir is as much a history lesson as it is the story of his early life.

Born in 1929 in what was then Czechoslovakia, Rafanovic was an only child, living in comfortable circumstances. Following his parents’ divorce in 1934, he stayed with relatives. Times were good, but all that changed when Nazi Germany took control of Czechoslovakia. Rafanovic and his classmates were shipped to a labor camp where they dug ditches. As the Germans retreated at war’s end, he was captured by Russian troops and put on a train, bound for a Russian labor camp or worse. But a bombing raid on the train enabled him to escape.

Over the next few weeks, the 16-year-old journeyed home and found work on a farm. With family connections, he was offered a position as the Austrian ambassador’s assistant in Prague and then as a receptionist in the consulate. Still later, he went to work on a relative’s farm, then took a hotel clerk’s job.

But with the Communist takeover of the Czech government, he decided to flee. He slipped across the German border in 1948 and was assigned to a displaced person’s camp, from which he eventually came to the U.S. in 1950.  My Life ends with Rafanovic arriving in Oakland, and with a teaser that the rest of his story will follow in Part 2.

Although Rafanovic’s overall story is certainly dramatic, it is told in a straightforward, uncomplicated way.  There are a few tense moments, such as his trek to the German border, but most of My Life recounts the flow of everyday life: reading books in his grandfather’s library, fulfilling duties as a hotel employee, working on a farm. Additional tidbits such as his involvement in the black market do add some spark, though.

Readers looking for page-turning excitement won’t find it here. But the author gives a credible first-person account of a time and events that many will find interesting.