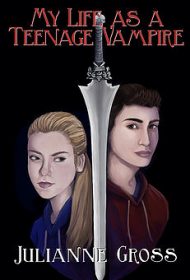 Teenagers are embroiled in a supernatural battle, divided along the lines of phantoms—slayers of supernatural beings—and vampires in this young adult novel by author Julianne Gross.

Jessica is a senior in high school, but spends most of her time in the secret world of phantoms, a group of highly trained assassins of supernatural monsters. Although a skilled phantom, Jessica has misgivings about her murderous role, feeling that supernatural beings deserve to live in peace.

When Jessica’s friend, Jacob, is attacked and turned into a vampire, Jessica realizes that the uneasy truce between vampires and phantoms in their small town is being threatened by an unknown enemy. Jessica and Jacob hope to avoid a war and find the mastermind behind the growing vampire rebellion.

Told in alternating points of view between Jacob and Jessica, My Life as a Teenage Vampire is packed with action and violent supernatural clashes. Gross has a vivid imagination for battle scenes and keeps the pace at a gallop with each conflict.

Despite this, the narrative suffers from shallow characterization. Gross has a humorous, sardonic style, writing things such as “Ghosts could be so annoying” in the middle of a battle; however, the voices of Jessica and Jacob are almost indistinguishable from one another. While the points of view are situationally different, the tone of the characters is so similar as to be confusing.

Likewise, the characters never grapple with deeper emotions. As a newly turned vampire, Jacob says that he is struggling with his situation, but his mental state is never shown in action. Aside from vampire-induced insomnia, Jacob’s routine and behavior doesn’t seem to change. Jessica, likewise, shows little emotional range. She screams in anger and viciously attacks enemies, but demonstrates few, if any, nuances in her relationships with friends.

Gross is a young author with promise. Although My Life as a Teenage Vampire has flaws, its strong pacing demonstrates the author’s passion and potential.