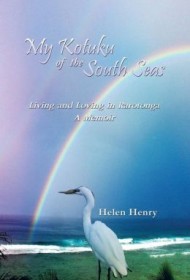 In My Kotuku of the South Seas, Helen Henry recounts six decades spanning her childhood in New Zealand through her marriage and subsequent family life in the Cook Islands. Her memoir, characterized by a lively, engaging tone, is presented as a series of vignettes interspersed with background narrative.

Henry was adopted in 1940 and raised in Otahuhu, South Auckland. After Henry’s father died, she went to work part time in a small store to help support her family. That same year, she met her future husband, Hugh Henry, at a school production of The Mikado. Hugh was a Pacific Islander Maori and the son of the Cook Islands’ first prime minister, Sir Albert Henry. Undaunted by the 1960s’ stigma regarding mixed marriages, Helen, a Caucasian, married Hugh and eventually moved with him and their four sons to be near his family in the islands.

Henry paints a vivid picture of the memorable events in her life. In one vignette we see her and her family struggling against the effects of a cyclone. “A rogue wave poured in through the back bedroom window, catapulting Michael out of bed and into the sun porch. The water then rushed out through a broken door, taking with it his bed, Mum’s suitcase, and my sewing cabinet.” Because of Henry’s relationship to the prime minister, we are also treated to an insider’s look at the islands’ contentious politics. The kotuku of the title is a white heron, which visits her at important times in her life, and Henry forms an almost mystical connection with it.

Henry’s memoir is written in an energetic, straightforward and somewhat non-reflective manner. It suffers occasionally from abrupt topic transitions and tense agreement problems. These difficulties, however, are not enough to mar its engaging story of a life well lived. Henry’s memoir should be of interest to those who like reading about family life and tribulations in unusual settings.