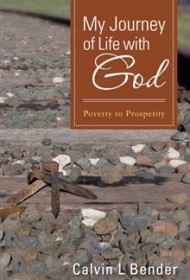 There is no denying that the author of this contemporary spiritual memoir believes in the saving power of God. Having spent an emotionally and materially impoverished childhood in Texas and later in Indiana, the author’s life became one of promise when he joined the Marine Corps, but forays into drugs –both using and selling – a sex addiction, and a nasty temper derailed his potential and led to a life without purpose. At the urging of a cousin, Bender gave his life to Jesus, and eventually married and had four children.

Despite having accepted Jesus as his savior, Bender found himself poverty-stricken time after time, until finally he and his family became homeless. Even as he concluded the writing of this book, he was unemployed, accepting suffering as being godly and waiting for God to provide.

While the author candidly shares both his sorrow and salvation with the reader, he fails to come across as a sympathetic character in his own story. Bender’s grim, passive and egocentric vision of Christianity clashes loudly with traditional beliefs. There is no mention of any acts of selflessness, generosity, tithing, or volunteerism on his part, for example, all ways by which Christians are asked to bless others. Further, in the great stories of the Bible, Jesus requires cooperation before he performs a miracle. (At the wedding feast of Cana, for example, he told the waiters to fill the jars with water before he turned it into wine.) The author places the sole onus for any change in his life upon God, thereby abdicating personal responsibility and obedience to the word of God.

Riddled with spelling and punctuation errors, misused words, and poor sentence structure, the book is a choppy read. Combined with the other issues, the memoir seems unlikely to attract many converts to Calvin’s way of thinking or to appeal to a wide audience.