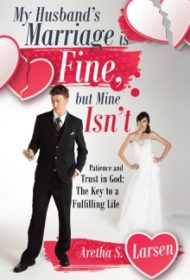 This faith-based novella features roguish Robert and long-suffering Sarah, who marry against her parents’ will and struggle toward a more Christian marriage.

Sarah’s parents oppose the marriage because of Robert’s prison history, but Sarah doesn’t see her roguish mate’s flaws until it’s too late. Now wife to a hard-drinking womanizer, she struggles to exercise her Christian faith, believing that through prayer and patience, things will improve. Only when circumstances become more than even Robert can control does the couple begin to take steps toward a better marriage.

The author clearly has promise, offering occasional intriguing passages, such as: “At each corner of the bar were… men who drank the day to doom and dared tomorrow to do its worst… It was a place for people who wanted to live a furious life—to leave the city with its daintiness and refinement and live life as life was at its basest.”

But unfortunately, this story more often utilizes a melodramatic, mostly omniscient voice that often rushes to “tell” and interpret for readers, drawing them out of her characters’ heads. For example: “One thing she [Sarah] believed most dearly was that Robert was her responsibility. It was her duty to…nurse his broken soul back to the path of salvation…” Additionally, Robert and Sarah’s dialogue is clichéd, and their two-dimensional characterizations make them difficult to care about.

Six pages are missing from Chapter 2, and readers might also be frustrated by the lack of context. No known place names are offered and most of the story happens in a fictitious Stallion City. Robert and Sarah elope to “the border,” but we’re never told which one. Many abrupt contextual shifts also contribute to a disorienting feel.

Readers may enjoy the author’s portrayal of Robert’s crafty friend, Abdul, whose narrative arc is the most satisfying. But overall, the book requires revision to attract an enthusiastic audience.