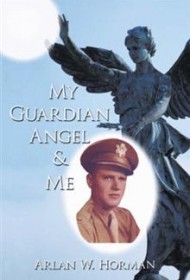 Wisconsin farmboy Arlan W. Horman spent the first half of his adult life as an Army engineer, from World War II through Korea. My Guardian Angel & Me is his account of his experiences as a soldier, and later as a civilian, ostensibly tied together by his belief that a guardian angel had his back, protecting him from harm in a number of dire situations.

The author isn’t attempting to give a comprehensive overview of U.S. involvement in the Second World War; rather, he offers one soldier’s version. Even at that, however, he skims over personal reactions to being at war and far from family. To such momentous events as D-Day, for example, he refers readers to the movie, The Longest Day because “it can explain it better than I can.”

While Horman sprinkles in a few entertaining anecdotes — he escorted Bob Hope and singer Frances Langford during part of a USO tour of England — his examples of a guardian angel at work are far too sparse to justify his premise. In the second half of his book, which he devotes to his civilian life and family dynamics, neither angel nor human saves him from the emotional and monetary costs of two failed marriages. The last chapters are a jumble of events that he covered earlier.

As a whole, the book feels like a string of loosely related recollections. Horman often abruptly jumps back in his memory to an earlier time, and on two occasions he leaves a narrative dangling in mid-sentence. Typos and notations to the author throughout the book are distracting, as well. Ultimately, My Guardian Angel & Me is better situated as a personal family history, rather than aimed at a wider audience.