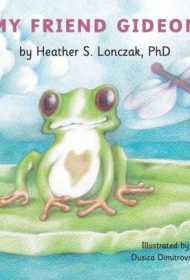 A girl learns to appreciate nature in its natural habitat in Heather S. Lonczak’s children’s picture book My Friend Gideon.

Six-year-old Rebecca wants a pet like her friend Maria’s bulldog. But, inspired by a nearby zoo, her ideas for a pet are outside the norm: She mentions a kangaroo, monkey, or peacock as possibilities. Her parents agree to a pet, and a picnic to Gooseberry Pond leads to Rebecca catching and bringing home a happy, energetic little frog. “He’ll be such a cool pet—much better than a dog!” she says.

But despite Rebecca’s best efforts, the frog, whom she names Gideon, is now mopey and miserable. Rebecca’s parents explain that Gideon misses his pond and the other frogs, and soon they set out to return Gideon to his home. The book ends with Gideon happy again at the pond, while the book’s rhyming verse informs that: “Rebecca felt proud/ as she heard the frogs sing./ Even though it was hard,/ she had done the right thing.”

Lonczak’s verses are smooth and playful—rhyming “Eddy” and “spaghetti,” for example, or “Gideon” and “amphibian”—with the exception of a few clumsy word choices (“whip cream” vs. “whipped cream”; the use of “abound” instead of the more appropriate “abounded,” in an effort to rhyme with “around” and “ground”). Also, the rhyme scheme occasionally changes from ABAB to AABB, which can be jarring.

The book’s colored-pencil illustrations are superb, showing a wide range of expressions in the human characters, with subtle details like Rebecca’s tiny grip pulling on her father’s shirt as she begs for a pet. The animal depictions are skillful as well, and each drawing is delicately shaded, with a pleasing sense of texture.

The book successfully delivers a sometimes difficult-to-accept message to young children who mean well, but whose pet choices might not always be practical. Inspiring appreciation for wildlife in its natural environment, My Friend Gideon is a sweet and memorable child’s tale.