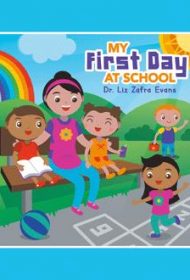 Dr. Liz Zafra Evans presents a dual English/Spanish children’s picture book in My First Day at School/Mi Primer Dia en la Escuela, in which a brother and sister get ready for school and enjoy their day with their teacher and friends.

Half the book tells the story in English; when the book is flipped, the same story appears in Spanish. In the English version, the children have lighter skin and reddish hair, while the Spanish version presents the children with darker skin and brown hair. Each page of text is matched with a facing full-color illustration.

The book is written in an appealing, simple style, appropriate for young children, but several problems hamper its effectiveness. First, the text has some errors; for example, one page reads: “I’m so happy is my first day at school.” While the story attempts to show both children’s perspectives, these choose-your-own-construction sentences can be distracting. “I’m a big boy / girl!” doesn’t have the same impact as a single, concrete statement.

In the story’s Spanish version, the text for the above sentence reads: “soy un (a) niño (a) grande!” The author is attempting to show an alternate, feminine version of the sentence, which would read: “soy una niña grande!” But the “a” in parentheses, spaced away from the primary word, is highly confusing.

While the art is bright and cheerful, the visual storytelling can also be perplexing. Early pages alternate, showing the boy or girl but not both. The same set of parents are shown with each child, but it’s well into the story before both children are shown on one page and it’s clear they’re siblings. This might puzzle young readers.

Revisions to address the issues above would improve the book. Still, children beginning to learn a second language might be able to look past these flaws and benefit from the stories.