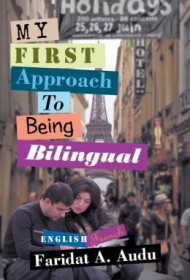 As a beginner’s foreign language guide, My First Approach To Being Bilingual presents itself as being “a very first approach for people who are still trying to find their way in learning either English or French.”

At a scant 59 pages, the book is organized into lists of words and phrases, with side-by-side English and French. Included are basic topics, such as “Greetings” and “Pronouns,” as well as less critical subjects such as: “Music,” “Clothes,” “Foods,” “Religion,” etc.

Unfortunately, while the book purportedly appeals to beginners, it does not have any actual instruction. There is no information on pronunciation, which is necessary for any student new to a language, nor any instruction on verb conjugation. Similarly, there is no direction on the important use of French articles, and the inclusion of them is inconsistent throughout, with half of a list incorporating them and half not.

Thus, this book acts more like a limited dictionary of words and phrases, organized under cursory headings. Some lists include odd entries such as “Tapestry-maker” under “Trades (Shops),” “Narwhal” under “Animals” and “Whitsunday” under “Holiday.” At the same time, obvious entries, such as “Cow” under “Animals” are often missing. Additionally, inappropriate organization makes some words hard to find; “Sandwich” is listed under “Sweets and Drinks,” “Robot” under “In The Kitchen” and “Protestant” under “Life and Death.”

Throughout the book, the author uses British-English, such as “Haberdashery,” “Trader” and “Secondary School,” which aren’t pertinent to American readers. And while the French translations are correct, some English translations are questionable, such as “Cooker” (stove) and “Crockery Liquid” (dish soap), to name a few.

Ultimately, this book feels like an erratic excerpt from a more comprehensive reference book, falling quite short of competitive material. Seemingly, by trying to appeal to so many in such limited space, it fails to organize itself in a way that would be helpful to readers.