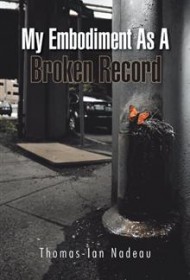 Finding an anchor in Thomas-Ian Nadeau’s self-described “autobiography” is difficult. In his author’s notes, Nadeau claims that the slim collection of vignettes is a “short autobiography.” At the same time, he explains conversely that the collection isn’t a straight life story, that it’s loosely based on The Vampire Chronicles series by Anne Rice and inspired by the character Hannibal Lecter from The Silence of the Lambs.

If that introductory statement feels confusing, the core text is even more challenging for readers. In short chapters with enigmatic titles such as “Actuality,” “But Forsaken once [sic] Again” and “Problem End,” the author sketches out a muddled mythology involving a confounding cast of characters. There’s Samantha and Daniel, a doomed couple; a heavenly angel named Archer; and a “powerful villain from the depths of Hell” named Malbowa. In segments that span mere paragraphs, Nadeau spills out seemingly stream-of-consciousness tales about these players, but there’s never a real narrative stream. Instead, the short book reads like a collection of journal entries in which the author struggles to come to grips with issues such as morality, homosexuality and the afterlife.

No clear message emerges in these pages. We’re left with cryptic observations about heaven and hell, and self-aggrandizing statements (in an introductory page) such as, “I CREATED MY OWN RELIGION … THIS BOOK IS GENIUS AND IT IS GODLY.”

In short, this puzzling text may be holy for the author, but for any reader trying to dive in without context, it’s merely confounding and confusing.