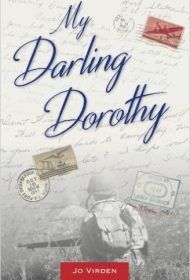 Inspired by genuine letters that passed between her mother and two love interests during World War II, Jo Virden’s historical fiction romance, My Darling Dorothy, is an out-of-the-ordinary peek at wartime reality on the home front and abroad.

In 1936 Nebraska, native Dorothy Ayers meets Jack Smith, “a dead ringer for Errol Flynn,”  at a dance. Over the next few years, Jack, nicknamed “Smitty,” travels the country looking for employment in the post-depression economy and sends letters back to Dorothy, who works for the Agricultural Adjustment Administration. Dispirited and aimless, he turns to women and whiskey. Realizing she can’t hold out hope for Smitty, Dorothy takes up with Tommie, a farmer, and they get engaged after a whirlwind courtship in 1941 before he leaves for the army.

Although Smitty reappears in Dorothy’s life, she’s wary. Meanwhile, Tommie soon ships off to the Philippines and goes missing during the Bataan Death March, which Virden renders with harrowing detail. Will Dorothy give Smitty another chance?

A framing story features the character Jo discovering a stash of 1930s–‘40s correspondence in her basement a few years after her mother’s death. The stamps, postmarks, and spellings are all authentic, while a distinct font approximates all the handwriting. (Using two different fonts might have helped distinguish Tommie’s letters from Smitty’s.)

The novel vividly recreates its various settings, including Dorothy’s small-town life and Smitty’s military service in Africa and Europe. Italicized passages presenting dreams and fantasies can be a little confusing, but alongside the letters they help change up the pace.and reveal more about these well-realized characters. Over the decade covered by the main action, Virden skilfully and carefully zeroes in on incidents that reveal the chance and irony of war, as when Smitty’s malaria saves him from a landmine.

Overall, the author has penned a compelling story—one that will hold particular appeal for fans of similar epistolary tales,  such as Annie Barrows’ The Guernsey Literary and Potato Peel Pie Society.