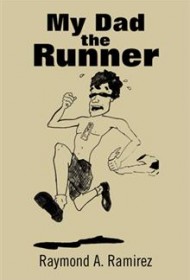 In his introduction to My Dad the Runner, author Raymond A. Ramirez writes that “Life may be knocking you down but you are measured by the number of times you are able to get up.” His memoir gets that message across.

The book features three segments: Ramirez’s childhood, military service, and life afterwards. The middle section, focusing on his service in Vietnam, is the meat of the story. (The title refers to his father’s years as a drug runner in Los Angeles, for which he eventually went to prison).

Ramirez’s childhood was difficult. He lived with his parents and four brothers in a garage for many years; saw his father taken away; and contended with gang violence. His escape was the Marines. Ramirez says he wrote the book to honor the troops who, like him, withstood the 77-day siege of the Khe Sanh Marine base in 1968.

His recollections of his military service range from the mundane (clerking duties) to the sobering (horrible deaths he witnessed). He also relates several events that turned him from a gung-ho Marine into a person more interested in getting out alive. “. . . you know that hero stuff I talked about as my reason for coming to Vietnam? Well, that went out the window the first day out in the bush…” When he returned to civilian life, he took a job with the Veterans Administration as a benefits counselor.

My Dad the Runner suffers from several flaws. Paragraphs are gargantuan and need to be broken up; there’s a bothersome lack of details (names, dates, etc.); and some stories are contradicted in later pages. Closer copyediting (“its,” “bonedocks,” “there” vs. “their”) would help as well.

But Ramirez has made a noble effort, one that will be of interest to his extended family and anyone seeking to understand life on the ground during the height of the Vietnam War. This is by no means the most thorough account of Khe Sanh, but it adds something to the overall picture.