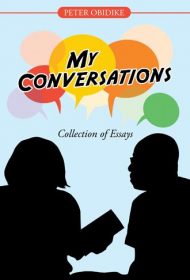 Nigerian writer Peter Obidike’s My Conversations delivers stories about his everyday life and frequent appeals to government leaders to do better. While he has published a few columns in his local newspaper, Punch, these essays appeared between 2013 and 2019 on his social media platforms or website.

A good-natured petroleum engineer living in the southern city of Port Harcourt, Obidike often uses words of his native language and references leaders and events in shorthand, assuming his readers will be familiar with them. Many of his topics are light and general, such as familial love, foods of his childhood, and the joy of reconnecting with college classmates.

More engaging are his indictments of regional and national leaders in a country listed among the world’s most corrupt. Obidike calls out the poor roads, unreliable power supply and crooked police. In one pointed essay, he writes slyly and credulously about how Nigerian boys brag that their fathers are honest, then wonders how Nigeria is so corrupt when every public servant is so law-abiding.

In another piece, titled “Why You Need to Buy My Book,” Obidike acknowledges that readers have seen his stories for free online. But he argues that his collective essays in hard copy create a handy historical record and admits he wants to monetize his efforts.

The author hits a nice balance between observations of everyday life and government criticism, but the collection poses reading challenges. Although grouped in three sections – “Contemporary Works,” “Food & Family,” and “Politics” – the essays, in fact, don’t seem organized topically. They also jump from year to year, which can be confusing. Finally, Obidike’s conversational writing style often rambles, and the prose is replete with spelling and grammatical errors.

As such, the book isn’t likely to appeal to general readers. However, it might interest Nigerians at home and abroad or students of 21st century Nigerian society, who could find rich material in Obidike’s disordered record of life on the ground.