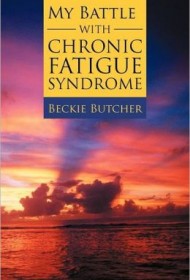 The Centers for Disease Control and Prevention estimate that a million people suffer from Chronic Fatigue Syndrome and tens of thousands more are sickened but undiagnosed. Marked by an all-encompassing, debilitating fatigue not helped by more sleep, CFS can cause severe joint and muscle pain and blur brain function.

Still, many who suffer say family, friends and even some in the medical community are dismissive of the condition, doubting its severity or even its existence. It is this double whammy of disease and denial that Beckie Butcher takes on in her memoir, My Battle With Chronic Fatigue Syndrome. “Eventually I couldn’t get out of bed except to eat and use the washroom. I couldn’t hold a conversation. But there was nothing clinically wrong with me,” she writes of her quest for a diagnosis, “My lab work was fine. For all practical purposes I was fine. But I wasn’t. I was terrified.”

The once-independent 43-year-old rode the roller coaster of first denying the disease to herself and then watching in bitter despair as others treated her with impatience. Deeply religious, Butcher eventually found solace through her faith, something she had turned away from in anger at God.

Butcher has an important story to tell, one that will be embraced by the CFS community. But the emotions are applicable to anyone suffering from an ailment – physical or mental – and those who care for them. The disappointment, however, is that while she clearly writes from the heart, her book needs more personal detail to lift it from a simple chronicle to something so much more. She hints at someone leaving her in her darkest moments, but we don’t know who or why. She talks of wanting to die to unburden her mother, but without more descriptive narrative about her daily struggles, it’s hard to fully understand her horror.

While the slim book offers an intriguing read as is, a more fully fleshed narrative would attract a broader audience.