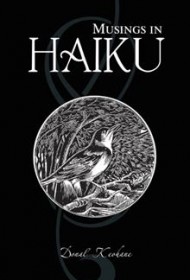 In this haiku collection, multi-media artist Donal Keohane presents observations about subjects including nature, relationships, childhood, cruise ships, cemeteries, and his cat. Most of these entertaining musings succeed in doing what this poetic form does best: “haiku simple thought / seventeen expressive sounds / so short and so much,” writes Koehane.

Keohane’s work includes deadly serious pieces, such as “folded triangle / a weeping spouse and children / for a questioned cause.” There’s also the occasional lighthearted piece that keeps the book from being overly somber: “nine nine nine nine / odometer turnover / will I miss again?”

In a book so short, however, repetition will be noticed. “A lone horse and cart / defying the modern age / the past made present” has the same concept and wording as “marble headstone rows / people of my youth interred / the past is present.” Likewise, these two poems about cruise ships sound quite similar: “artificial days / a time out from working hours / memories for years” and “eight days of leisure / far from work and daily drive / memories to keep.” The poem “rise, dress and coffee / compulsive paper reading / a daily pattern” appears twice, once on page 62 and again on 68.

The lack of organization will be most problematic for readers. In keeping with haiku tradition, no titles appear with poems. Without titles, an introduction, chapters, or section headings, readers face the formidable challenge of deciphering poems presented in a near stream-of-consciousness style. While the subjects of cruise ships, cemeteries, and graduation ceremonies go on for pages; other times up to six seemingly unrelated poems appear per page. For many people, poetry reads like a secret code; without organizational guidance from the author, readers have an additional (and unnecessary) barrier to comprehension. Despite Keohane’s many successful haikus, that is likely to be the case here.