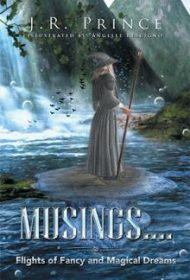 This collection features poems about subjects such as isolation loneliness, rejection, exclusion, and lost love, in addition to three short stories unrelated to the poetry. Black-and-white illustrations by Angelle Rescigno accompany much of the work.

The book is divided into two chapters (more accurately described as sections) titled “Flights of Fancy” and “Magical Dreams.” Poetry subjects and themes in both chapters overlap, and two poems— “Elements of Rage” and “Silent Messenger”—are mistakenly repeated. The stories appear randomly throughout.

The first chapter includes seven poems in “The Traveler” series. They discuss the speaker’s struggles with being isolated and misunderstood. Unfortunately, they are told in mostly abstract language that fails to resonate on an emotional level, as in: “Empty sounds of loneliness / seeking someone to hear. / Potent within his walls / he avoids all contact.” While some other poems in the section contain more imagery (“Her eyes…/blue wells:/ Sunshine behind a smile/ Fire with a frown”), the majority are abstract as well. Many suffer from grammatical, spelling, and punctuation errors.

The second chapter includes a similarly themed “Poetical Necromancer” series with traveler presented as poet. These ten poems include lines that are similar to each other,  such as: “I wield the power of cognition”; “Hunched over tools of power”;  “Wielding an instrument of power. [sic] / new spells form”; “With the weapons of cognition / I weave my spells”; “Rejected… / spells of power filled with wrath,” and so on.

The short stories are imaginative, featuring an old Indian legend, a girl with a magical lyre, and an astronaut testing a spacecraft, but they seem out of place in this heartfelt poetry collection and would fit better in a themed collection of short stories.

In sum, this is an uneven offering. While the author shows potential, stronger imagery, a tighter focus and professional editing would greatly enhance the content.