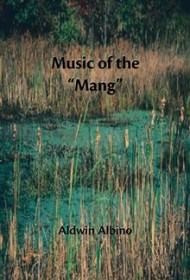 Place can be a powerful focal point in memoir, as the places we come from affect how we live in the larger world. In Music of the “Mang” Aldwin Albino describes a life shaped by both his love of performing and the mangrove swamp that abutted his childhood home.

Albino was born and raised in Trinidad and drew life inspiration from parents whose strict Catholicism still left him room to thrive. He describes playing near the mangrove swamp, a pleasure that carried some risks as it harbored poisonous snakes and other dangers. Albino worked as a teacher and television host, and played in various bands before emigrating to Canada to seek more opportunities for his new family, and after some trial and error made a home for them far from the one they’d grown used to.

Albino’s writing is jumbled and prone to mixed metaphors: “[R]emembering that problems are opportunities in work clothes, I put not only my head, but also heart and soul to the grindstone.” He includes names of classmates, work colleagues and friends, but the information adds nothing to the reading experience since we learn very little about them. The family conflict over his choice to play the steel drum (they felt it belonged to the lower classes) is interesting, though, and his career path is long and varied.

If the book relies a bit too heavily on cheerful aphorisms to make Albino’s points, it’s to his credit that, as a result, his focus is on gratitude for a good life and those who helped him along the way. Music of the “Mang” leans more toward keepsake than general interest reading, but it is occasionally entertaining and will be much loved by the author’s friends and family.