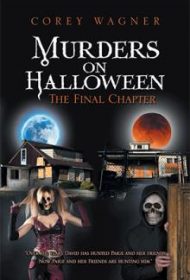 In Murders on Halloween: The Final Chapter, Corey Wagner offers an homage to classic ’80s slasher flicks with a story of Halloween horror.

Wagner’s novel focuses on serial killer David Graves, who is presumed dead, and his institutionalized sister Paige Compton (aka Danielle Graves). When Paige escapes from the asylum, a series of murders ensues. As Paige’s relationship to David, which had been covered up, is slowly discovered by her friends, they investigate to determine whether Paige is homicidal like her brother, or whether David has miraculously resurrected himself.

Eventually, it becomes clear that David is alive, and both he and Paige plan to meet again, although their motives diverge in a shocking twist. The novel draws to a violent conclusion on a Halloween night.

And while the novel draws upon many tropes of the slasher film genre, it does so in a gratuitously gruesome manner (e.g., Wagner describes the murder of a teenage girl in which a wrench is shoved into her vagina), which has the potential to drive away the most avid horror fan. The author also repeatedly details scenes of teenage sex, but tends to employ unrealistically crude imagery and dialogue. (At one point, a teenage girl begs her boyfriend to “bang the hell out of me…I want you to put the meat in me as hard you can.”)

The novel’s writing mechanics are also flawed. Words are consistently misspelled or incorrectly used, and the work is rife with grammatical errors. Misplaced quotation marks abound, as do other typological errors.

At best, Graves has produced a draft of a novel rather than a finished copy. Intensive work on both style and substance is needed before this story is likely to appeal to readers.