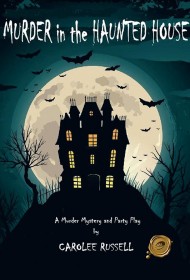 There’s no shortage of humor in Carolee Russell’s mystery, Murder in the Haunted House. Even though the book spells out the details of a grisly murder, the narrative is full of silly wordplay, zany gags and nods to pop culture. Part whodunit novel and part script for a “party play,” the book tells the story of an unfortunate séance spearheaded by Phyllis Stein, the widow of industrialist and chemical manufacturer Frank N. Stein.

A year after Frank’s apparent demise in a chemical explosion at his factory, Phyllis draws on the otherworldly skills of medium Madam Angelica. The effort to conjure her dead husband from the netherworld draws a varied group of attendees who sport colorful names such as Priscilla Penniless, Lance Knight and Willard Hemlock.

Most of the book’s first section is dedicated to spelling out the relationships between the guests. There are children from previous marriages, bodyguards, lawyers and Frank’s former business partners.

This network of relationships and motives becomes even more important after the séance turns bloody and ends with a gruesome murder. Detective Cloque Jouseau (another nod to pop culture) arrives to nab the killer. In typical Agatha Christie fashion, the story turns to an exploration of motive, opportunity and access to find the (unlikely) killer.

After revealing the murderer, Russell turns to her second goal: spelling out specific instructions for hosting a “murder mystery party.” She offers a list props (including a cap gun and crystal ball) and provides in-depth character studies of more than 30 players. For anyone with the patience, resources and dedication to recreate the tale in person, Russell provides all of the necessary instructions.

Assuming every detail is in place, the story has the potential to provide many laughs and entertainment for a dedicated troupe of players. Despite some cheesy wordplay and spelling mistakes, Russell has assembled a mystery with enough twists and turns to keep interested players actively involved.