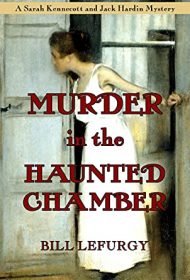 The second in author Bill LeFurgy’s mystery series reprises the unlikely duo of Sarah Kennecott and Jack Harden to solve three murders linked to a spiritualist who claims to talk to the dead.

Kennecott and Harden are opposites. She’s a brilliant forensic medical doctor—a rarity for women in 1910 Baltimore, when the novel is set—who appears to be on the Asperger Syndrome spectrum. She focuses on details and is socially inept, speaking bluntly to everyone, including her partner in their detective business, Harden.

Harden, by contrast, is a streetwise PI who hangs out in bars and bordellos. He conducts research in the shadowy backrooms of Baltimore while Kennecott prefers libraries. The tension between them is palpable, sparked by a mutually unrequited attraction.

This story opens with Kennecott seeing her sister’s ghost, who shows her a woman who’s been murdered. Then the scene switches to Harden, who sees ghosts that haunt him from a battle in the Philippines. Kennecott is hired to find a missing assistant to famous spiritualist Lydia Nightingale, and she recognizes the assistant from her ghostly vision. Harden jumps at the case because he wants Nightingale to help rid him of his ghosts.

The book is a fascinating twist on the detective genre with its paranormal elements. It’s grounded in the psychology and science of the day, as well as with historic details of 1910 Baltimore. Don’t bother Googling when electric light switches were first used, or when pay phones became common—LeFurgy, a professional historian and archivist, knows the territory.

LeFurgy’s prose clips along at a crisp pace by evoking the language, underworld settings and vivid analogies of American noir fiction a la Hammett and Marlowe, as when Harden walks through a hotel kitchen: “Lunch was being served, and the place was swarming like a kicked anthill.”

The book is chockfull of exciting detective work, fast-paced dialogue, keep-‘em-guessing twists and engaging characters, delivering crime solving at its most satisfying.