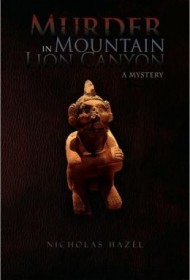 Nicholas Hazel’s novel revolves around a pair of murders in a new luxury housing development in Tucson in the shadow of a towering rock formation.

A local geology professor, convinced the rock formation that looms over the “La Roca” (“The Rock”) development could collapse in a natural—or unnatural—disaster, has raised a panic through the media, angering the developer. When the professor turns up dead, the developer is the prime suspect — until another murder casts doubt on that conclusion. Since the story takes place around Halloween and the Mexican Day of the Dead holiday, ghosts and skeletons abound, making it more difficult to track which suspects are where, and when.

As the story unfolds, four main characters – Nick Moor, his wife Anne-Marie and their friends Luigi and Eva Mantini— chat repeatedly over drinks and dinners about the crimes affecting their community, trying to piece together clues to solve the murders.

While the plot sounds engaging, this mystery unfolds far too slowly; almost a third of the book passes by before anyone dies. Hazel presents his plot like a puzzle that’s pondered from multiple perspectives, but this leads to over-writing and unnecessary, distracting details (i.e.: “They were enjoying their martinis, Bombay Sapphires on the rocks with olives. They had ordered, Luigi, his usual filet mignon, the others, the sea bass that had just been flown in from Chile”).

The writing is grammatically clean, but the story is choppy (too many short chapters jumping from one character’s point of view to the next), and the author uses copious exclamation points and question marks in conversation and internal dialogue, lending an amateur feeling to the narrative. After a while, the plot begins to feel like a grown-up Hardy Boys adventure with wives added. Ultimately, it’s hard to become emotionally attached to any of these privileged, amateur sleuths.

In sum, despite a promising premise, the story will likely have difficulty engaging readers throughout.