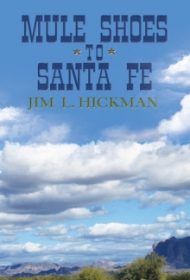 Jim L. Hickman’s Mule Shoes to Santa Fe is a classical story about three young cousins as they journey from their Tennessee home to be part of settling the West.

As the novel opens, Ross Greenup encounters his cousin Tim and his step-sister Rachel on the trail. Just then, he spots two armed men who grab Rachel and threaten to “blow” Tim “right in two.” Ross shoots and kills one of the men, and as they prepare to take the other to the marshal, Ross takes a stash of gold coins and foreign money off the dead man’s body.

Soon after this, Ross, Tim and cousin Caleb head out on horseback to scout for land where the family can raise Morgan horses and mules “to supply all the outfits going west.” It’s 1840, and the trip is rife with danger. They survive a tornado, Indian attacks and attempted robberies. They also learn the money they took from the dead man was intended for Mexico’s fight with Texas, and important people are intent on avenging the deceased man and recapturing the money.

This is a well-plotted story with authentic characters and colorful descriptions and dialogue (” … I figure he remembers the time I tied old man Johnson’s leg to the table leg when he was asleep at the church dinner. Then I yelled that his horse had run away. Old man Johnson jumped up and jerked the table over”). While there is abundant danger in the story, it’s balanced by the honorable main characters and the camaraderie they share.

There are some distracting editing issues in the text, including misspellings (i.e. “considerable” for “considerably”; “shore” for “sure”); these may be intentional, perhaps to illustrate a character’s speech, but their random application is confusing. The narration also flips between past and present tense.

Those matters aside, this tale will be enjoyed by a wide range of readers, particularly those fond of historical Westerns.