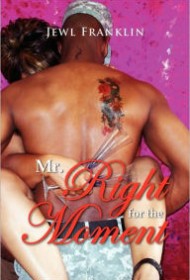 A sexy, honest, touching and often humorous fictional memoir, Mr. Right for the Moment chronicles the romantic life and relationships of Tiffany Scott as she searches for her perfect mate.

Tiffany spent 26 years playing a supportive role in her emotionally abusive husband’s life. She stood by him, helping to further his military career and he thanked her by constantly cheating. Eventually, Tiffany had enough and left the marriage. In her new freedom, she searches for passion, sex, and companionship, eventually finding it with Smith, her soon-to-be-married close friend. A satisfying long-term relationship with Smith is not to be, and her next relationship is ill fated as well.

While she doesn’t necessarily succeed in these relationships, Tiffany does triumph in other ways. On her own, she’s financially successful, a good friend, and fully embraces her sexuality. She’s a strong woman, and a relatable character. She’s clearly flawed, making more than a few poor choices with men, but many women will relate to her mistakes. Though she becomes a bit cynical and guarded, she never stops believing that she deserves love and a good, honest man.

The story rambles a bit, at times lacking in a clear purpose. However, the book as a whole is both charming and poignant. The pages are filled with natural dialogue, easily accessible emotions, and the romantic insights of a lovable female protagonist. The author also understands how to write desirable leading men—the kind that women fall in love with even when it’s clear that they’re the wrong guys.

Mr. Right for the Moment has plenty of heat and lots of heart. It’s a romantic book for readers that understand that love stories aren’t always perfect, and that sometimes there are a few Mr. Wrongs before finding Mr. Right.