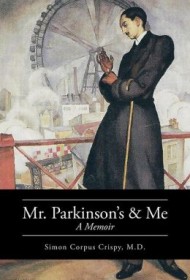 Simon Corpus Crispy details his perilous life’s journey after being diagnosed in 1995 with tremor-dominant idiopathic Parkinson’s disease in this moving and unsettling yet insightful memoir.

Texan Crispy (whose name suspiciously sounds like “Corpus Christi,” though the author never indicates that it’s a pen name) was only 42 years old and a successful geriatric physician when told he had Parkinson’s. The book travels forward and back in time as Crispy discusses his travails after first being misdiagnosed and given drugs that made his true condition worse.

When the Parkinson’s was finally pinpointed, another drug cocktail caused disturbing hallucinations of paisley and pink elephants, paranoia and rashes. Seeking a better solution, he agreed to undergo deep brain stimulation (DBS), a newly approved (and then imperfect) radical procedure involving surgically implanting electrodes in the brain to control the tremors. He had three more surgeries between 2007 and 2010.

In between explaining what Parkinson’s is and the difficult symptoms and side effects with which he struggled, Crispy excavates the troubles it caused in his personal life, including the loss of two less-than-understanding wives and his difficulty getting work in medical settings that he believes discriminated against him because of his Parkinson’s.

Crispy’s story is creatively told, interweaving into the story details of the harrowing night he rode out the massive 2013 rainstorm and flood in his hometown of San Antonio, which serve as an analogy to the stormy trauma of his personal woes. The author is adept at drawing word pictures as well, such as when he compares the spotty communication of brain cells in those with Parkinson’s to losing cell phone reception and describes viewing himself post DBS surgery as “a strange version of Frankenstein’s monster, with electrodes jammed into my brain. . .”

While deeply personal, Crispy’s honestly told book offers clear, informative details on Parkinson’s issues and treatments that can contribute understanding, insights and hope to others with the disease as well as their loved ones. It is worthy of a wide audience.