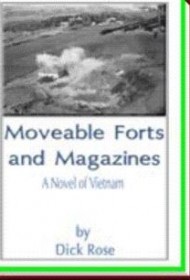 Moveable Forts and Magazines offers a credible story, steeped in Navy culture and seasoned with the unrest of the ’60s.

It’s just another hot, dry Monday at U.S. Naval Base Point Cambiar in Southern California – that is, until Senior Chief Journalist Dan Levin answers the phone and learns that the rear admiral’s son, Lt. Fred Hetherington, has failed to show up for his flight back to Vietnam. So begins the race to keep the news from the public and find Hetherington Jr.

Levin carries the bulk of the book, with Hetherington making occasional, but weighty, appearances. Hetherington’s plight is never more poignant than when the young pilot attempts to explain his refusal to return to combat:

“Ron yelled to his forward gunner, who had taken cover behind the gun shield, to use the Honeywell,” Hetherington tells his father. “He fired about four grenades. Two of them hit the junk and blew it out of the water … Blew it out of the water, Dad! With the machine gunner, with the woman, and with that kid on top. But what were we to do? …What kind of people are they? What kind of people are we?”

The novel raises philosophical questions about war and morality, patriotism and duty. To author Dick Rose’s credit, there are no pat answers, but rather a search for personal truths. The story is well written by an author who has lived the role. The extensive dialogue moves fast, with wisecracks and witticisms traded regularly. At times, though, the plot bogs down in Navy detail, and the chronology is not always linear, so it’s important to note the dated chapter titles.

Overall, this is a provocative read that will be especially appreciated by the children of the ’60s and those interested in learning more about those times.