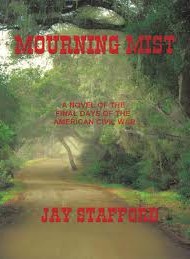 Here on the 150th anniversary of the American Civil War, there is no shortage of books on the subject, a great many of them of excellent quality and well worth the reader’s time. A large number of them are scholarly tomes, valuable but close to impossible to lift. Some are novels, good and bad. Jay Stafford’s offering is a short but well-scripted and affecting novel.

Three young men, Alabama boys and close friends, are too young to join the Confederate Army when the War begins. Four years later, they are old enough and desperately needed by a depleted force, and they enlist. The characters are convincing as teenage boys. They are neither idealists nor zealots; they see themselves as fighting to protect their families and homes. They do not all come home.

Stafford chooses to set this novel at the Battle of Fort Blakely in Alabama, a name less familiar to contemporary Americans than Gettysburg or Fredericksburg. The great irony is that this battle was fought after Lee had surrendered to Grant at Appomattox Court House. Everyone who died in this battle was unaware of that fact.

One of the strengths of the novel is that Stafford demonstrates that war is about more than glory or heroic death. It is also about mud and hunger and fatigue and confusion. Stafford has clearly done his research; he loves his subject. To his credit, he wears his learning lightly. The reader never feels lectured to or overburdened with facts only minimally related to the narrative. Many Civil War novels focus on the viewpoints of the generals and other high-ranking officers; The Killer Angels comes to mind. Stafford is working out of a different tradition: the war as it looks and feels to the young boys who fight it on the ground. It makes for an engaging and edifying read.